I was recently admitted into the Google Glass Explorers program. This means I’ve been granted the privilege of spending

$1,500 for a pair of prototype computer glasses that could conceivably be available at Best Buy next month for $300. However, as my much wiser friend Fr. Gunn often says, you gotta pay to learn.  Here’s a video I made Sunday to give you an idea of what I’m learning and doing with ’em – I must say I’m really thankful to my parish community for trusting me to do this: 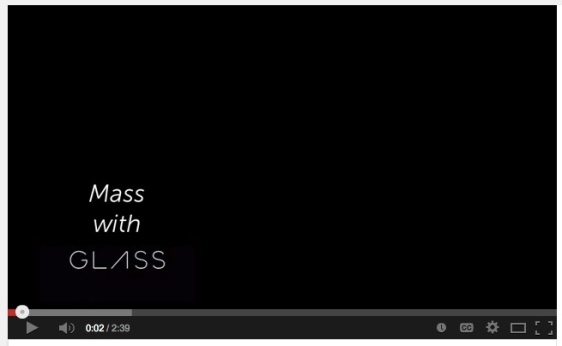 So far, Glass has turned out to be a really cool experience. I won’t bore you with a rundown of what this gizmo does, this guy does a much better job, but I will say that the ‘Directions’ app is superior to anything I’ve ever seen or used.  The bluetooth phone, mic and headphones are only tolerable when you’re someplace really quiet, like a church (which works fine for me). And I’m having recurring problems getting my phone and Glass to stay in sync. But the ability to respond to emails and texts really quickly is growing on me (Glass actually reads me these).  Plus, I’ve always hated texting/typing on tiny smart phone keypads, and the voice recognition software here means lots less typing.

The dorkiness factor is rather huge, and having never worn glasses getting used to them hasn’t been all that easy. Plus, this report says 72% of Americans just don’t dig Glass at all – which has pretty much been my experience too, though this is totally dependent on age: haven’t met too many young people who hate ’em, nor too many old people who like ’em.

There’s a term for obnoxious people who wear these things, ‘Glassholes,’ which is why the term ‘Glassholy’… I know, priest joke. I experienced this Sunday when I took this video — I had to take Glass off halfway through the sermon and at the Communion rail because I was feeling distracted and not taken seriously; I sensed others were too. Church is a sensitive environment to bring a camera, even if it’s pretty well hidden. And I expect a certain amount of pushback from people along these lines as a result of this little experiment. However, I think it’s really important for us to be trying new things, to experiment and put ourselves out there. We are living in some of the most dynamic, developing, and innovative times the world has ever known and I think the Lord wants us to be in the game. If you’re interested in getting Glass, as of late last night, they are now available to anyone – so if you have any questions I’d be happy to help.